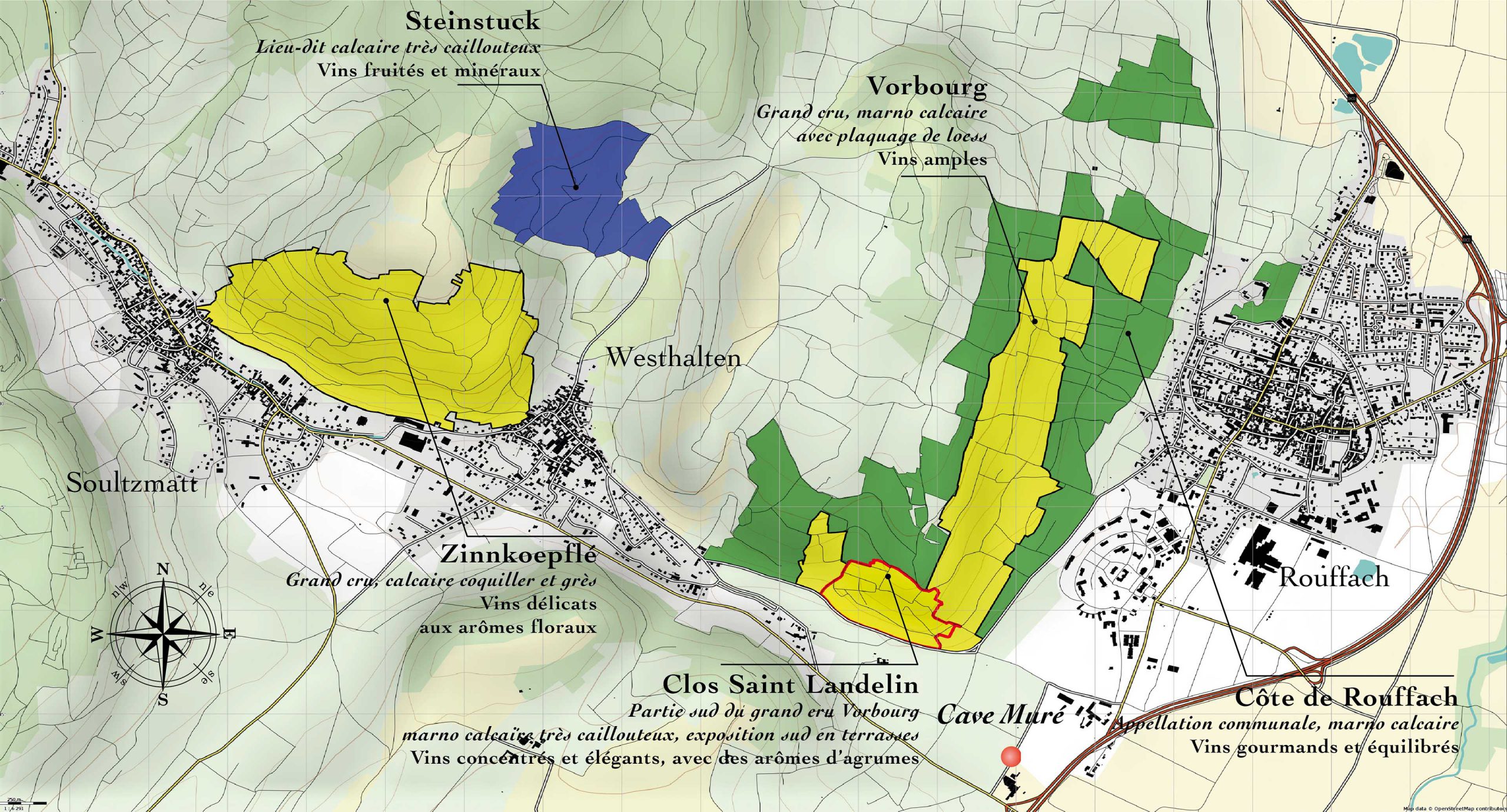 Situated at the southern end of the Alsace wine-growing region (10 miles south of Colmar), the Rouffach vineyards have been famous since Roman times.
The Grand Ballon and the Petit Ballon, the two highest peaks in the Vosges, protect this region from rain-bearing west winds, resulting in an exceptionally sunny, dry climate – with just 500mm (20 inches) of rain, the annual precipitation rate is less than that of Nice.
To this can be added the richness of our clay-limestone soils and calcareous sandstone subsoils, which are equally suited to each of the seven different permitted Alsace grape varieties: Riesling, Pinot Noir, Gewurztraminer, Pinot Gris, Muscat, Sylvaner and Pinot Blanc.

Clos Saint Landelin lies just to the south of the town of Rouffach.
This property, once owned by the bishopric of Strasbourg, was a gift by Bishop Heddon to the Saint Landelin convent in the 8th century. The deed of covenant refers to “vineyards that are among the best in Alsace”.

Alfred, grandfather of René Muré, acquired the domaine in 1935 and sold the wines in bottles. It is now in the sole ownership of the Muré family.

Elegant and complex, the wines from this outstanding vineyard develop fine fruit aromas and are extremely long-lived. 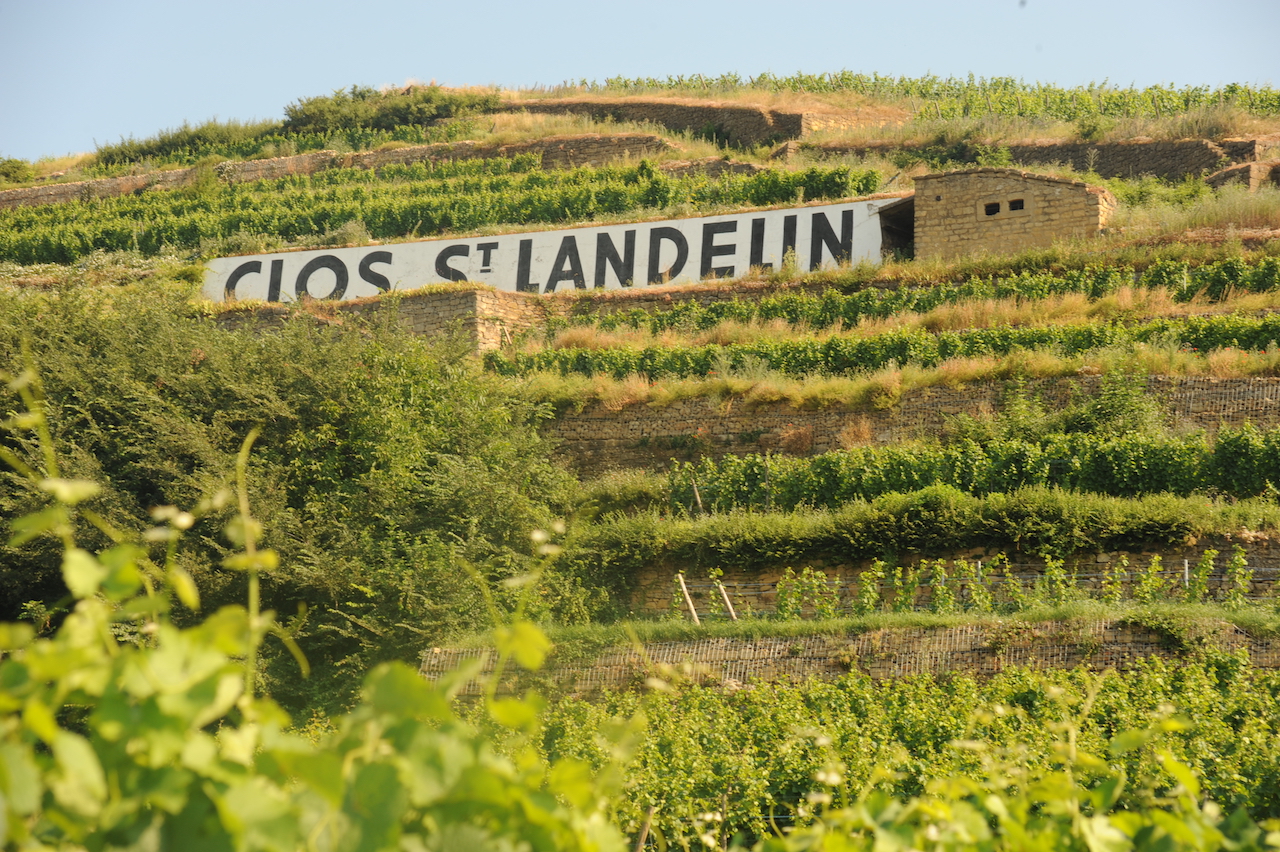 Situated at the southern end of the Grand Cru Vorbourg vineyard.

Riesling: at the bottom of the slope

Gewurztraminer and Muscat: in the central section of the slope

Pinot Gris: in the southwest corner

Pinot Noir: on the flat

Sylvaner: in the southeast corner

History of the Clos Saint Landelin

In the 7th century, Dagobert II, who ruled in Austrasia, presented the Bishops of Strasbourg with the Rouffach region, known then as the Obermundat. This vast estate remained the property of the bishops until the French Revolution.

Landelin, an Irish monk, came to evangelize Baden (Germany) during the 7th century.  He was murdered around 640. According to legends, four springs emerged at the exact place of the crime. A series of miracles supposedly took place on the martyr’s tomb. These events lead several monks to settle nearby. A first monastery was erected around 725.

Heddon (734-776), Bishop of Strasbourg, reorganized the monastery of Mönchzell “Cella monachorum” which had been founded in honour of Saint Landelin on the right bank of the Rhine. He created a second, bigger monastery a few miles from the original one. In memory of his benefactor, the monastery was named Ettenheimmünster (from the Latin “Ettonis monasterium” meaning Heddon’s monastery).

The monastery was granted property in Rouffach, including vineyards. This estate was called the “praedium sancti Landelini”, the bien Saint Landelin or Saint Landelin property.

Some of those plots of vines are located on the former lieux-dits Altengassen, Mannberg and Vorberg (the original name of the Vorbourg Grand Cru).

The book “Liber Vitae”, written between 1250 and 1372, which contains donations and bequests made to the Church of Notre-Dame de Rouffach, mentions vineyards located near plots of “Bien de Saint Landelin” and close to the Saint Landelin fountain.

According to the historical cadastral plans of Rouffach, the Saint Landelin fountain is located in the lieu-dit Hauhl, now known as Clos Saint Landelin. It still flows at the foot of the vineyard.

In 1409, the Berler family from Rouffach was granted a emphyteutic lease on the “Bien Saint Landelin”, which remained an ecclesiastical property until the French Revolution.

After 1871, Alsace was integrated into the German Empire. Dr. Jur. Wolfang Weber, one of the pioneers of the renewal of Alsatian viticulture, bought the plots of land surrounding the Saint Landelin fountain one by one. He brought the vines and the dry stone walls back to full working order.

In 1918, the estate was put under court receivership by the French administration. It was then acquired in 1923 by Alfred Erny, an entrepreneur from Soultzmatt. He marketed the bottled wine under the name Clos Saint Landelin. He was able to continue the work of Dr Weber for seven years. In 1930, he sold the Clos Saint Landelin vineyard with the stocks in barrels and bottles to the Union Vinicole du Haut-Rhin in Colmar. This company only owned the Clos Saint Landelin for 5 years. In 1935, Alfred Muré, Véronique and Thomas’ great grandfather, bought the estate. The Murés are a family of winegrowers whose origins go back to 1650 in Westhalten.

The Grand Cru Vorbourg is located in Rouffach, in the south of Alsace, and is sheltered by the Petit Ballon and the Grand Ballon, two of the highest peaks of the Vosges. Its marly-limestone soil rests on Oolithic (Jurassic) limestone and Oligocene limestone conglomerates. It is rich in iron, which gives it a characteristic red ochre colour. The Vorbourg is exposed to the south and south-east.
«V» is the initial of Vorbourg, the terroir from which this wine originates. As of today, according to the specifications of the Alsatian Grands Crus, the name Vorbourg can only be attributed to the white grape varieties Riesling, Gewurztraminer, Pinot Gris or Muscat.

The Vorbourg produce powerful and velvety wines, with elegant expressions of fruit aromas. Their finish is lifted by fine bitters. 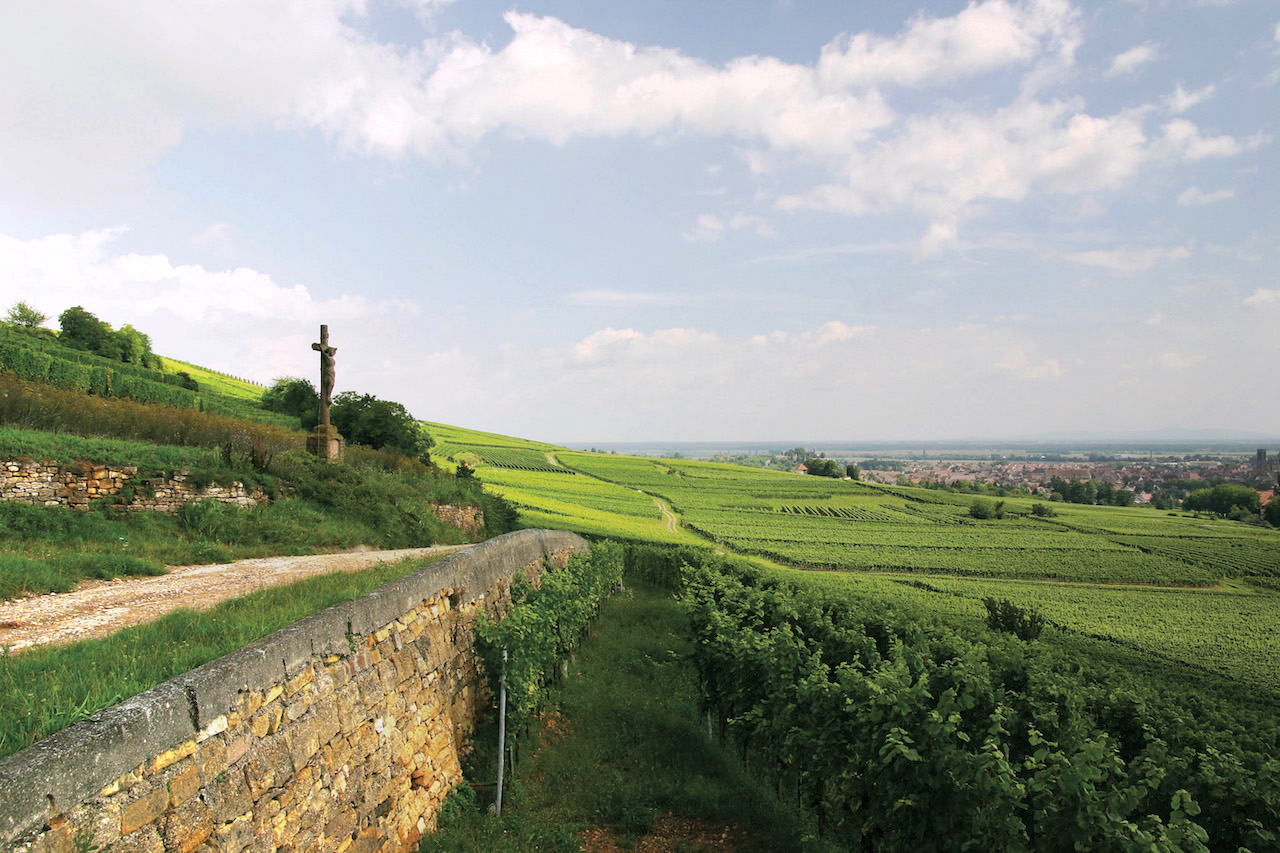 Clay-limestone soil with occasional patches of loess in the downhill sections. 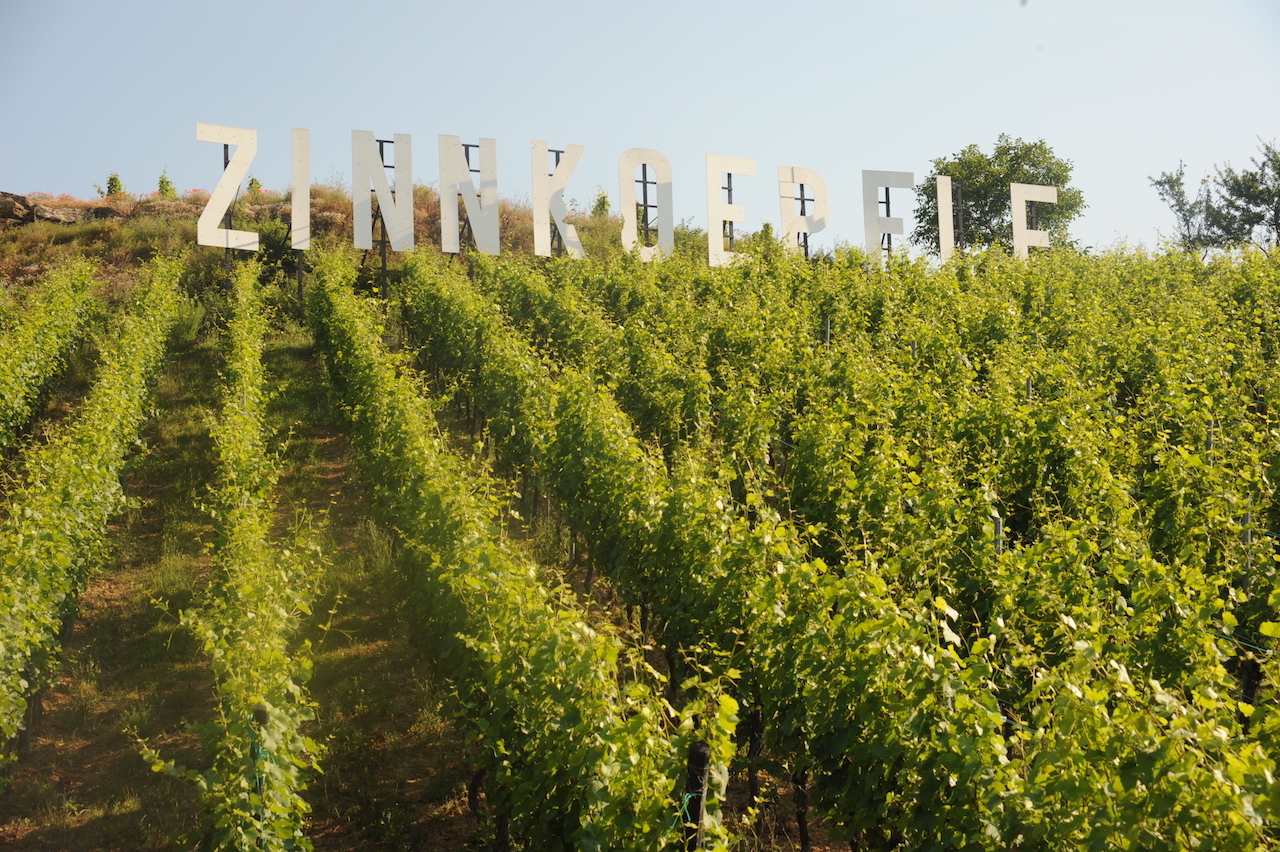 Calcareous sandstone topsoil with a predominance of shell limestone (Muschelkalk) from the Triassic period.

Situated in the Soultzmatt Valley

The Steinstuck is a nice place nestled above the village of Westhalten and gives racy and fresh wines marked by mineral and chalky notes and wet rock. The limestone terroir, stony, gives the name Steinstuck which means “stones plot” in alsacian language. 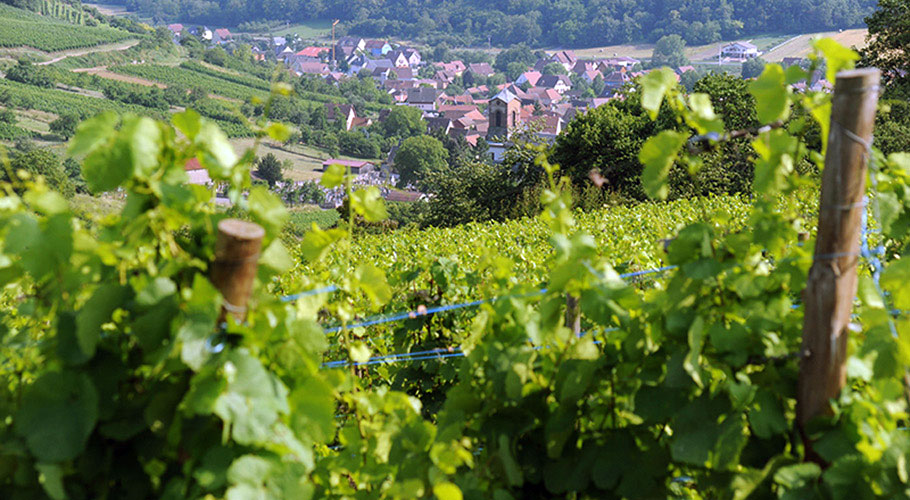 Above the village of Westhalten.

The plateau located above the Clos Saint Landelin is named “Lutzeltal”. The origin of this name is “lutzel” or “litzel” (little) and “tal” (vale). In fact, this plateau has the shape of a widened vale.

The soil is stony there : it is sandy limestone with a little clay. The climate is very dry, due to the exposure to the wind and to the fact that Rouffach is the area in Alsace with the lowest precipitations. This makes us training the vine to have deep roots, and avoiding high yields. 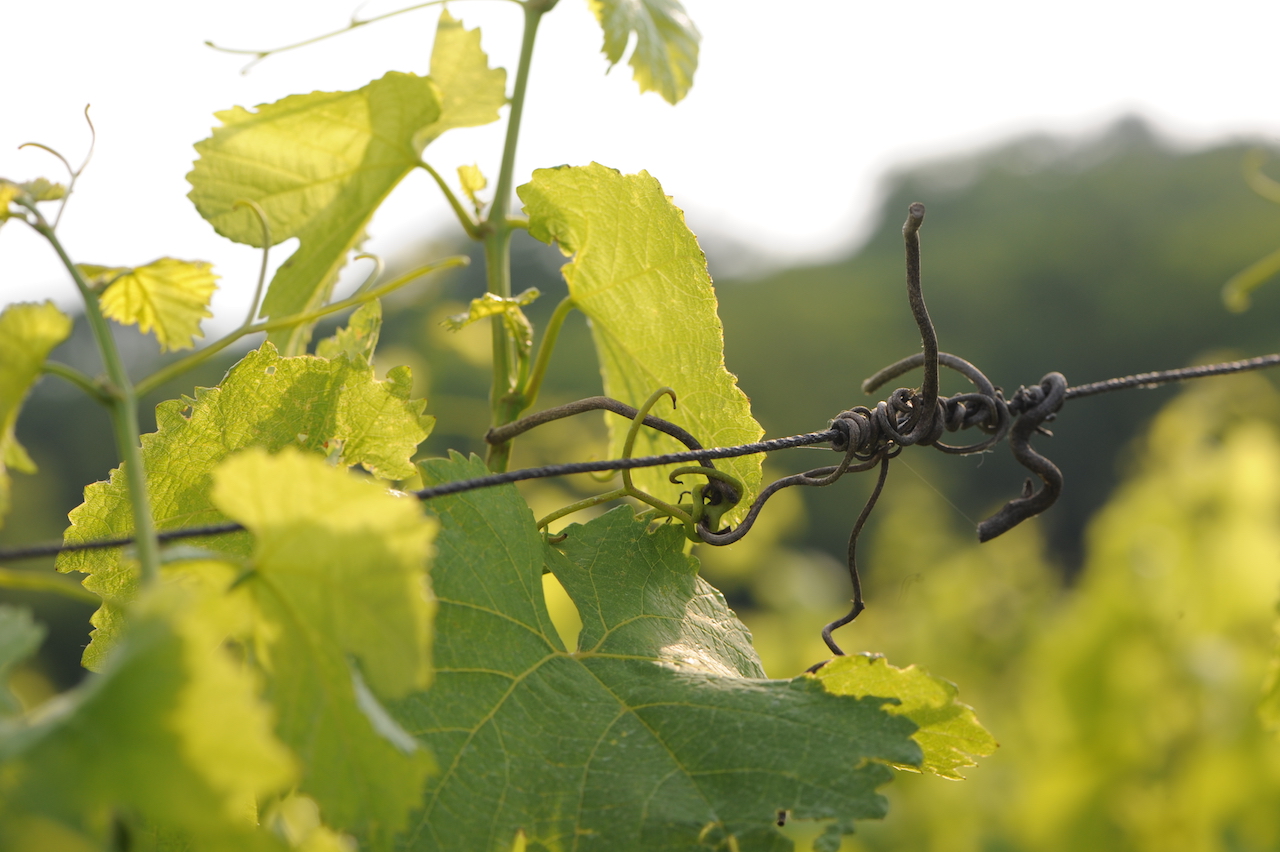 Plateau above the Clos Saint Landelin.

Côte de Rouffach is a collection of south and southeast-facing slopes grouped around the small town of Rouffach.

Sheltering in the lea of the Vosges, which protects them from maritime influences, these slopes bask in sunshine: the ideal conditions for full ripening of the grapes.

Wines grown here are distinguished by their delicacy, fruitiness and freshness. 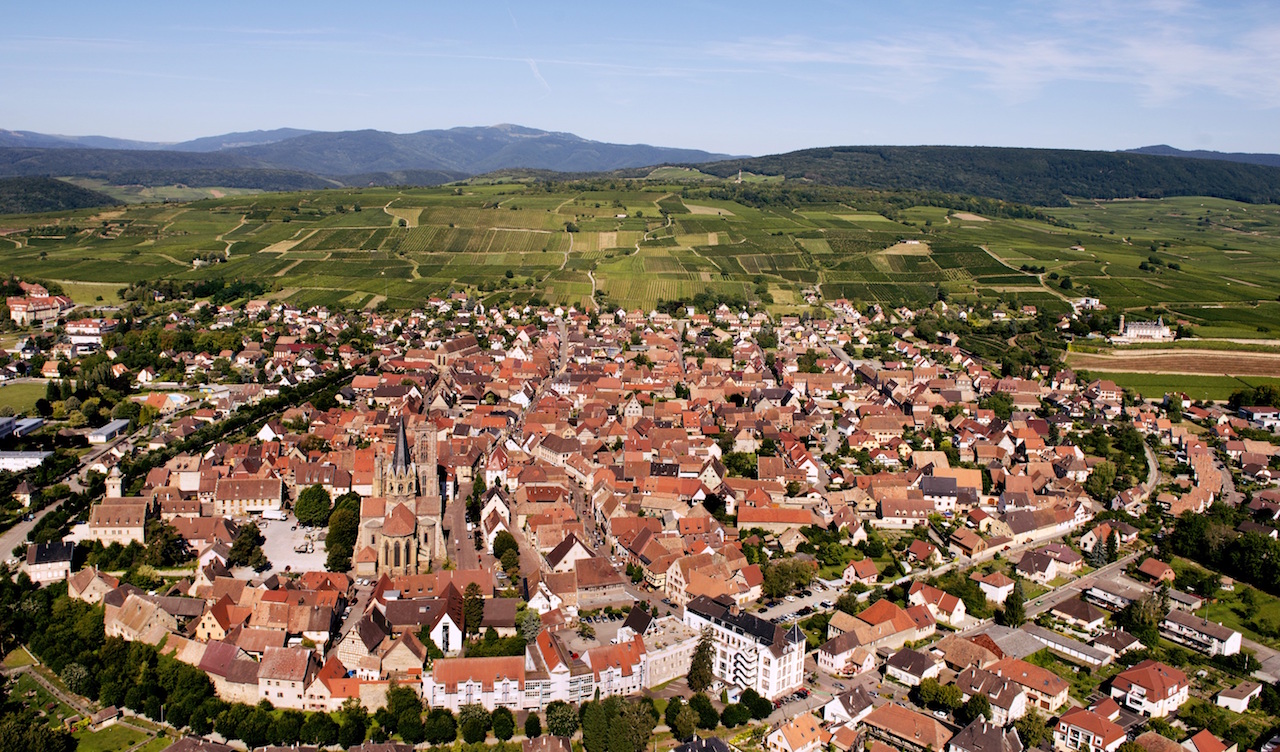 Various slopes around the town of Rouffach.